This semester I took an Android development course. I’ve struggled with Android programming in the past, mainly due to my Web background. Most web apps have a different architecture and different API style, and I always found Android development quite difficult to wrap my head around due to its embedded nature and lifecycle methods.

Additionally, in the time since I first started developing in Android, I’ve actually had some experience with strongly typed and strictly scoped languages - my previous experiences were all with Python and Javascript so I had no idea what a finalizer or interface even was. This would probably be my first recommendation to beginners - get a deep understanding of a language like Java or C# before you start coding for Android or other embedded systems.

Doing the course gave me a deeper understanding of how to bring together an application with all the fragments, activities, services, and interface components. I eventually came out the other end with a fairly polished Android application that I’m quite proud of.

I’ll go through a few things that I had troubles with throughout the semester, in this article.

Android Studio’s default templates around Activities and Fragments tend to assume a lot about the setup of your application, so I had some initial issues involving Android v4 Support fragments that aren’t compatible with the custom Material Datepicker library I use. After doing some research, I found out that with an Activity that extends the AppCompatActivity, you can use the SupportFragmentManager and the FragmentManager interchangeably, depending on the version of the Fragment you want to push into it.

Due to this initial confusion, I feel it’d be better if Fragments were covered within the scope of the course, as I am unsure whether I’m causing potential memory leaks in the application by merely doing TransactionManager replacements rather than manually calling detach and destroy lifecycle methods.

Learning about the Android 6.0 permissions model was also difficult, as information is still sparse and inconsistent around permissions. Asking for permissions for various Web APIs in Javascript is fairly easy with a simple callback or promise interface, whereas callbacks in Java are quite a bit more complex and feel dirty in their need for shared state.

The Google Maps API documentation skips over the actual requesting of permissions for location data, which blocked my progress until I could piece together the various pieces. I feel this could be more fully covered throughout the course perhaps.

I was surprised to find that significant concepts and design patterns I learned from working on web-based systems overlapped with those power developers use in their Android applications. For example, view binding libraries such as Butterknife and dependency injection, found in Dagger as well as most enterprise applications.

The EventBus pub/sub concept suggested by Ryan Heise, whilst not needed for a low-complexity application such as QuestionTime for Android, is something I have worked with before.

This overlap made it easy to implement shortcuts that I’ve used in the past, and highlighted key areas which could be improved by my existing knowledge of design patterns.

The largest challenge I had when developing was the concept of the UI thread and background threads. This was emphasised requirement that long-running requests happen on another thread without any Javascript Promise-like features to reuse requests across different activities different UI components. I initially wrote a wrapper library for the Google Location API, but found out later that it pretty much required Activity-level implementation; this may be implemented in Android Services, but I did not have the knowledge to implement them.

I used a bunch of different libraries within my application, and I’d like to highlight some here.

I hope to get this on the Play Store by the end of the year. In the meantime, here’s some screenshots of it: 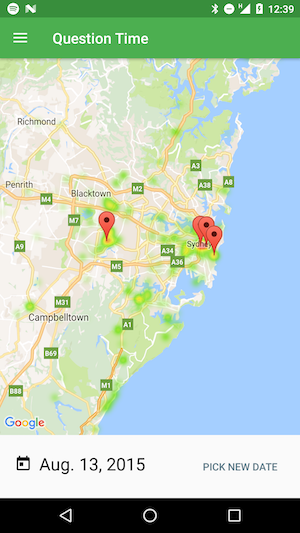 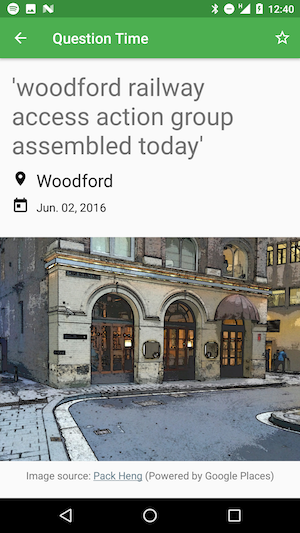 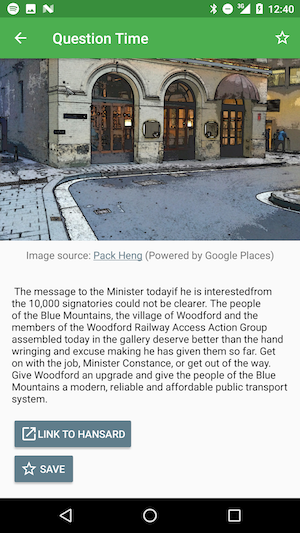 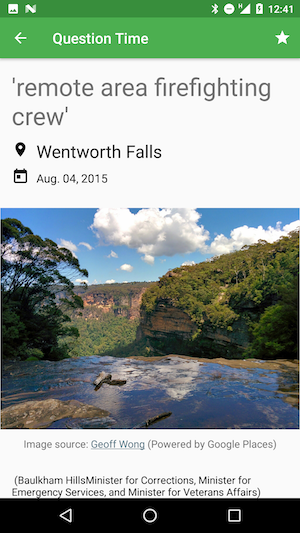