After months of planning, deliberating over talks and hoping it would all come together, Campaign Monitor’s Devcamp for 2019 is over. A great 3 days of sessions and hangs was had and I’m so glad we got to run it. 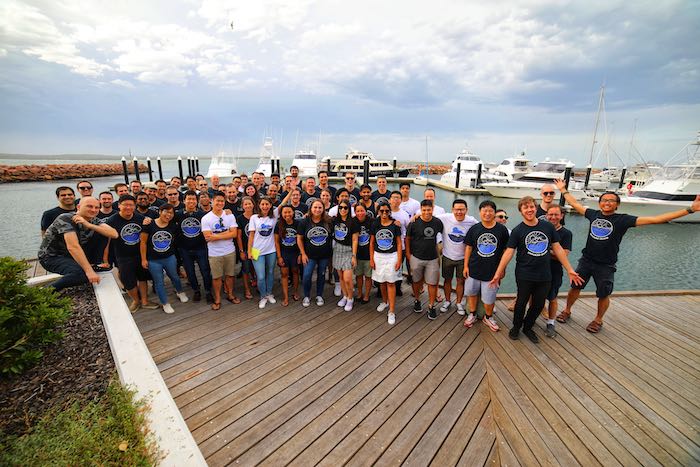 I’ve got a few thoughts I’d like to share on the experience while it’s still fresh in my mind.

Things I am left thinking from organising Devcamp

We found having a website allowed us to manage the schedule for the days on the fly and give important information when it was relevant. It also helped people add prerequisites for workshops where necessary.

Also, it was way better than hosting something on the internal company wiki or other channels, which are only accessible via VPN 😭

The site is as of writing still up at devcamp.club if you wanted to check it out; I’ll probably find some way to archive it so it doesn’t end up costing me to host it on Heroku.

Everyone loves free stuff. Shirts allow you to identify with the event, generate tangible excitement beforehand and if you have unique iconography for every year, it makes it kinda fun to wear in the future years to come.

Georgie did a really good job of canvassing people on options, and we had a few customisations to the shirt game this year - check it out here.

Check something out you may not have looked at before. Talk to people both those you know and those you don’t!

How to give feedback on talks + workshops

This is something we didn’t crack this time. The offsite is a time for people to hone public speaking skills, and people would probably love to get some constructive feedback. It’s part of the matrix we use to judge individual contributors and tech leadership alike, so it’s essential that we get better at it.

We floated a few ideas, none of which we got to implementing before Devcamp:

Either way, we’d prefer to have immediate feedback since the longer you go before offering feedback on a talk or workshop, the less valuable the information will be to the speaker. Something for next year!

Try to make it accessible for all

This was also difficult and something we didn’t tackle this time around either. People like being far away from their daily troubles; it lets them think and be creative without the knowledge that they’ve only got thirty minutes till the next meeting.

But we also want to be inclusive of folks who can’t be there for the whole experience - and three hours is a long way to travel if you’re only going for the day because you have family commitments. We’re insanely family friendly here at CM and it’s something I pride the organisation I work for on. If we get to doing Devcamp next year, I’d love to do it closer, maybe the Blue Mountains or something.

Things I learnt from attending

What am I gonna do next?

Look, not a lot. I’m feeling pretty recharged from this experienced though, and I got a lot of good memories from it all.

I registered the domain https://haikufriday.club and pointed it at a Netlify build, and I want to actually make use of it to host a randomly generated haiku every Friday. I don’t yet know how to generate a haiku procedurally, but that’s half the fun, right?